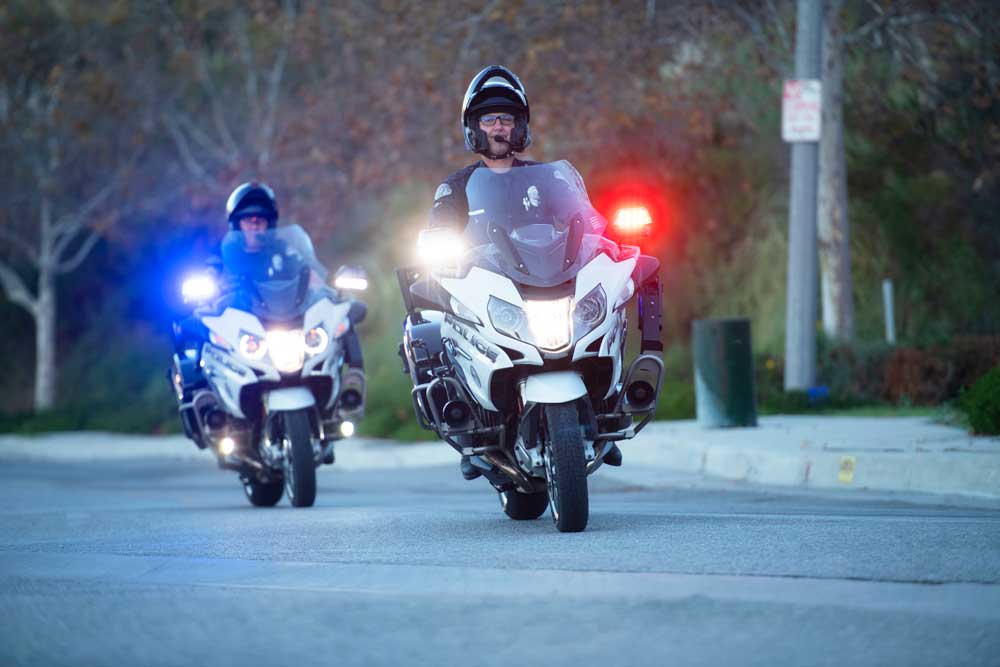 The West Covina Police Department investigates all reported traffic collisions that occur in the City of West Covina.  When an initial report is taken at the scene by patrol officers, it is forwarded to the Traffic Unit for further investigation if it involves a hit and run. The Traffic Unit finalizes the determination of fault and, if necessary, issues a citation for the traffic violation.

The Traffic Unit, along with patrol officers, identify areas in the city where an abnormal amount of collisions take place. These areas are analyzed to determine if a change can be made to reduce the likelihood of future collisions.  In some cases, heavier traffic enforcement may be implemented by the traffic unit in an effort to reduce the number of collisions and injuries to motorists.

The Traffic Unit investigates all reported hit and run collisions.  These investigations can result in collecting evidence, interviewing witnesses, arresting suspects, and the possibility of criminal charges being filed.  California law requires you to stop if you are involved in a collision.

The Traffic Unit is also responsible for the scheduling and deployment of DUI checkpoints and/or roving DUI patrols.  These deployments often involve several other local agencies in an effort to prevent individuals from driving under the influence or apprehending violators.

An abandoned vehicle is defined by the California Vehicle Code Section 22651(k) and West Covina Municipal Code 22-22 as any vehicle left parked or standing upon a street or highway for seventy-two (72) or more consecutive hours. Vehicles that are reported as being possibly abandoned will generally be marked and left tagged for the required 72 hours prior to receiving a citation or being removed.

The following are some signs of an abandoned vehicle:

When calling in to report a vehicle, please have the following ready:

Occasionally, the West Covina Police Department may have a vehicle stored or impounded.  In order to retrieve a vehicle, an impound release must be obtained from the Records Bureau at the West Covina Police Department. An impound release can be obtained during regular business hours of the Records Bureau, which is 7:30 am to 5:30 pm – Monday through Friday (Excluding holidays).

Vehicle Impound Release:
Fee: $200.00, which is payable by credit card (Discover, MasterCard, or Visa) or cash (exact change only)

To obtain a release of a stored/impounded vehicle, you must present all of the following:

You must first obtain a release from the police department prior to picking up at the towing company. After paying the vehicle release fee at the West Covina Police Department, towing and storage fees are charged by the tow company. The towing company fees will vary with the type of vehicle stored and the time elapsed since the date of storage.

Please call (626) 939-8500 during regular business hours (7:30 am to 5:30 pm | Monday through Friday | Excluding holidays) for further questions regarding the release of vehicles.

If you need a copy of your traffic collision that occurred after September 1, 2016, click here to obtain it online. A fee of 10.00 will be charged (Reports before that date are available in person at the West Covina Police Department)

If you receive a parking citation and would like to pay the fine online, please click here.

If you feel you have been issued a parking citation in error, you can contest it here.

The West Covina Police Department does NOT accept traffic (moving) citation payments. All payments and hearing dates for traffic citations are handled by the Los Angeles Superior Court. Please visit here for questions related to paying a fine, requesting an extension, requesting traffic school, or reserving a court date for a traffic citation issued in Los Angeles County.